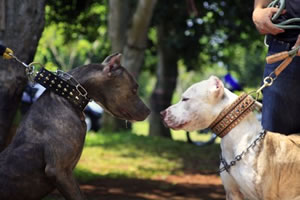 Unlike pet abuse (which is a felony in 47 American states), dog fighting is a felonious crime in all 50 United States. Having received national attention with the arrest and conviction of professional football player Michael Vick, more people than ever are aware of this underground sport. Activists continue to fight an uphill battle to have it completely eradicated. Dog fighting is clearly harmful to animals as a large, but virtually unknown, number of dogs are seriously injured, maimed, abused and even die as a direct result of fighting. It is also harmful to society-at-large, since dog fighting goes hand in hand with illegal drug sales, gambling, interpersonal violence and a host of other crimes.

Of the 64.5% of dogs whose abuse is reported by the media, 25% of those are Pit Bulls. In other words, one out of every four instances of dog abuse reported by the media involve a Pit Bull. This is because this particular type of dog is intentionally bred and raised to fight.

Owners who engage in dog fighting purposely raise their dogs to be aggressive killing machines. Those who do not fight or are unable to fight are often sacrificed to more aggressive dogs as a way of reinforcing their killer instinct. These dogs are raised to bully others in order to build their fighting skill and confidence. Literally, many Pit Bulls are raised in kill or be kill environments. Is it any wonder why so many of this particular breed receive media attention for attacks against humans and, in particular, children?

Dogs bred and raised to fight eventually find their way to an illegal, underground sporting area where admission is charged to spectators anxious to watch two dogs literally tear one another apart until one is too wounded to continue or is actually killed by the other. Dogs that live through these battles are often killed by owners on the spot either out of the anger of defeat or because their broken bones, torn skin and ravaged bodies are deemed too damaged to be of any good in future fighting matches. In these cases, dogs are often shot, stabbed or have their throats cut.

While the aggression that underground fighting instills in animals raised for this sport is of serious concern to animal lovers everywhere, the aggression that the sport promotes in humans should also be of grave concern. Children are often allowed access to these events and are emotionally scarred in the process. Psychologists fear that many become immune to violence and aggression toward animals and other humans as a result of repeated exposure to dog fighting. It is a fact that animal abuse also has a distinct correlation to serial murders and domestic violence.

Take Action Because dog fighting is an underground sport, it is very difficult for authorities to stop it where it exists. These events are not publicly advertised and their locations are kept very secret. In order to take action against it, the Humane Society offers a $5,000 reward for information leading to the breakup of illegal dog fighting operations.