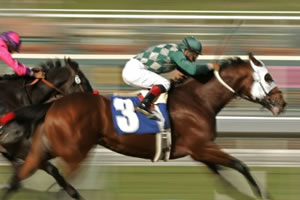 According to the thoroughbred registry known as The Jockey Club, as many as 15 racehorses die on the job each week in America. Many of these horses are literally run to death, forced to race even while they suffer from broken bones, internal bleeding and other injuries, yet are still forced to race. In an attempt to mask their suffering from the public, horses are injected with drugs such as cocaine and other substances that would otherwise be deemed illegal for this use. That horse racing produces more than 100 billion in annual revenues and is such a widely accepted, and even cherished, sport is not helping the plight of these animals who suffer and die for America’s entertainment.

Were Thoroughbreds Ever Intended For Racing?

Some cite that the very way that horses are formed should exempt them from racing. With many thoroughbreds weighing 1,000 pounds or more, their slender legs and ankles simply cannot support the weight of their upper bodies, especially when being forced to run at maximum speeds while carrying human beings on their backs. Though most love to run as second-nature, the extra stress placed on them to run faster than others is often too much for these majestic animals to physically endure. 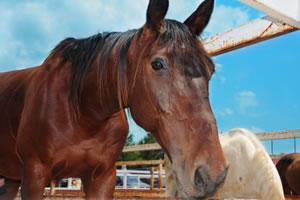 When racehorses are no longer of value to the sport, many of them are put to death. A number of retired racehorses are, in fact, sold to slaughterhouses outside of the U.S. where their meat is sold to restaurants in other countries. Compounding the cruelty, these once adored athletes are often herded together and transported in cramped conditions for several hours or days without food or water during their final journey.

A Multi-Billion Dollar Industry Presents a Problem for Advocates

Part of the problem in rescuing racehorses is that their owners are typically wealthy individuals and corporations. Considerable wealth and resources are invested in the purchase, maintenance and training of these animal athletes. As previously mentioned, horse racing is a sport beloved by many. Some horses have even reached the pinnacle of fame and had their stories told by major entertainment studios, such as Disney, who produced a film about the most famous racehorse in American history, Secretariat.

How, then, can activists assure the safety of these animals? Especially when few people view their treatment as cruel or abusive in the first place? We encourage everyone to begin by educating themselves further on this animal abuse niche. Further, it is important that this information is shared as it is not otherwise widely publicized. Saving horses from cruel and abusive practices within the racing industry must truly begin as a grassroots effort.

You Can Make a Difference

Each and every day in America, a countless number of pets are abused at the hands of humans who are responsible for their care. Without a voice, these animals have no one to turn to. Literally forced to suffer in silence, it is only when or if a caring individual takes notice of their pain and chooses to take action in reporting these crimes that abused pets are actually rescued. It is a fact, however, that many are never rescued and are forced to live, and eventually die, as victims of violent abuse.