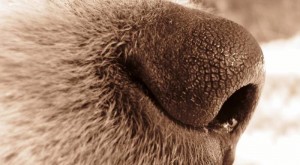 Canine Cancer Detectives are for Real

Julian Omidi looks into the intriguing topic of whether dogs can detect cancer in human beings.
Can your dog’s nose find cancer in your body? Long supported by anecdotal evidence from pet owners, scientists are now collecting data in controlled studies that should tell us whether our suspicions are correct. In fact, a nonprofit organization, the InSitu Foundation, is dedicated to training canine teams that will do nothing but use their noses to tell us whether a person has cancer.
Dr. Ted Gansler of the American Cancer Society says that malignant tissue gives off its own special scent that dogs and other animals can pick up on. Fortunately, dogs are domesticated and easily trainable, so their cancer-fighting abilities are highly valuable to researchers. Canines use their keen sense of smell to indicate cancerous tumors in humans with about 90 percent accuracy. In some cases, all the dogs need to do is smell a person’s breath or urine to know whether cancerous cells are present in large numbers. Experts in this new field are careful to warn us that while the idea of dogs sniffing out cancer is exciting, we humans should still undergo regular screenings to see if we need traditional medical attention for cancer or other diseases.

Besides cancer, what else?

Other researchers have discovered that dogs can probably also detect low blood sugar with stunning accuracy. It appears that any dog with a healthy nose can be trained to indicate various diseases in humans. Cancerous tissues and blood cells give off scents that are too weak for people to notice, but easy for a dog to pick up on.
Some doctors who spend time researching dog behavior say there are credible cases of canines who seem to know when a nearby human is about to have an epileptic seizure. The educated guesses about this incredible phenomenon focus on a dog’s ability to possibly detect the slight change in electrical charges that occur before a person has a seizure.
The InSitu Foundation is a California-based organization that has taken a leading role in training animals to find cancer in humans. Their hope is that dogs will eventually become a very low-cost way for doctors to screen for many types of maladies, from cancer and diabetes, to epilepsy and heart disease. Right now, InSitu is seeking FDA approval for their canine scent detection kits. The organization also publishes research on the topic and educates the public through its website, dogsdetectcancer.org.
Thank you for reading,
Julian Omidi
Julian Omidi and his brother, Dr. Michael Omidi, are a co-founders of Animal Support. The brothers fight for animal rights and encourage others to do the same.